Shopping Cart
Your Cart is Empty
Quantity:
Subtotal
Taxes
Shipping
Total
There was an error with PayPalClick here to try again

Thank you for your business!You should be receiving an order confirmation from Paypal shortly.Exit Shopping Cart

The Theodora Project: Changing the Face of Human Trafficking in Jamaica

The Theodora Project is a non-profit organization located in Negril, Jamaica--West Indies. Our mission is to empower young people who are at risk of being exploited in human trafficking and the commercial sex trade by offering opportunities for education, skills training and personal development.

There is a safe house for the protection of the more vulnerable and at risk students as well as the school which offers skills training and *HEART (Human Employment and Resource Training) certification, so that its students can get jobs. The smiles of teachers and students at the Theodora Training Center is evidence that this program works, not just for students but for the entire Jamaican community!

This is such a wonderful project but like many good deeds it is at risk of losing funding and closing all its entities. You can donate funds by contacting the Negril Rotary: http://www.rotarynegril.com 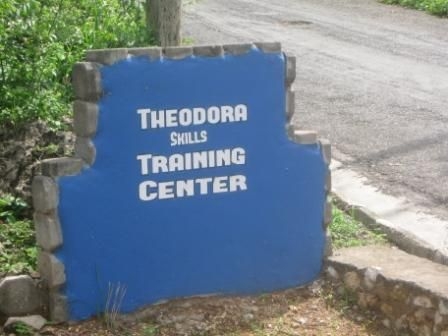 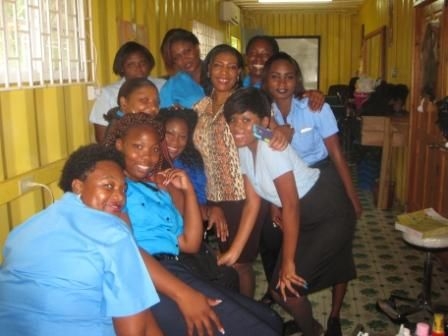 Students and their vocational education teacher at the Theodora Training Center

Dr. Masani and student at the Theodora Training Center

(2) Articles about human trafficking in the U.S.

(3) Articles about human trafficking in Jamaica

The National Leadership Prayer Breakfast (NLPB) Committee in association with the Victoria Mutual Building Society (VMBS) presented $400,000 to the Theodore Foundation on Thursday. The funds were raised from the 35th staging of the annual prayer breakfast at the Jamaica Pegasus Hotel in New Kingston in January.

The Theodora Project is located in Negril, Westmoreland. It is a non-profit, educational facility that caters to youth from 17-25 years who are at risk of human trafficking and other forms of exploitation due to a lack of educational and employment opportunities. It has a safe house for the protection of the more vulnerable and at-risk students, as well as the school which offers skills training and HEART certification.

Jamaica is listed as a source, transit and destination country for women and children trafficked for the purposes of sexual exploitation and forced labout. Human trafficking is estimated by the United Nations to be a $32billion [USD] per year global trade.

Founder of the Theodora Foundation Reverend Dr Margaret Fowler told the Jamaica Observer that the money will be used to refurbish infrastructure at the institution. "This opens up the possibility of extending our building so that we could provide a proper lunch facility and breakfast program for some of our students. Some of our students come to school with nothing at all, so that is one thing. The other area we really want to look at is to expand our computer lab. Our computer lab has not been upgraded for some time, in fact for eight years, and you know technology is changing so that is one that we need to do because you know young people need to know how to operate computers.

President and CEO of Victoria Mutual, Richard Powell, said that the project came at the right time. "Based on our theme of the 2015 Prayer Breakfast, 'Return...Reconnect...Rebuild With God', I believe that it is timely that the NLPB has selected the Theodora Project in Negril... This project provides an avenue for some of these youth to return to society, in some cases reconnect with family and their loved ones, and is a safe haven for them to start rebuilding their lives. Theodora is providing them with a second chance through remedial education, skills training and empowerment," he said. He added that he was proud to be associated with the NLPB committee to support a project that will assist at-risk youth, and implored other organizations to work together to make a difference in the lives of youth.

Havagay Walters performs at the PACT/USAID closing ceremony of the Anti-trafficking in Persons III Project, which has empowered hundreds of vulnerable young Jamaicans and sensitized thousands more to the dangers of trafficking, at the Terra Nova AllSuite Hotel on Wednesday.

The awareness of human trafficking among Jamaicans is expected to increase significantly as People's Action for Community Transformation (PACT) has trained students as peer educators. The peer educators are expected to carry the anti-trafficking messages and warnings to their friends, families and community members. Human trafficking, which is referred to as modern day slavery, occurs when persons, especially women and children, are enticed into being taken or forcefully moved from one part of Jamaica to another, or from one country to another, where they are usually forced to work.

in the Anti-trafficking in Persons III program, funded by the United States Agency for International Development (USAID). The project began last May and comes to an end this month. The students were provided with skills training, counselling and information on how to recognize and avoid the dangers of human trafficking. More than 70 of the 103 peer educators graduated during a ceremony held at Terra Nova AllSuite Hotel yesterday. The rest will be certified when their training is completed at the end of this month.

Others trained completes training of peer educators Students expected to boost awareness about human trafficking. Three nongovernmental organizations trained, counselled and coached the students. They were Children First, Western Society for Upliftment of Children in Montego Bay and Church Action Negril, through its Theodore Project.

Mario Abrahams, one of the peer educators, lauded the program, saying that he was well informed about trafficking and had been taking the message to his peers in his community. "Living in the inner city does not make you less of a person. I am seen as a role model to my friends," Abrahams told the gathering. He added: "In my community, I reason with young people on the corner." A student from Church Action Negril said the program had made him a better person. "I once was a bad boy. I once was in bad company but the Theodore Project has helped to build me to where I am today," he said.

In his remarks, Sean Osner, USAID's deputy director in the Office of Sustainable Development urged the Government to continue activities that raised awareness of the risks of human trafficking. Shelia Nicholson, project coordinator of PACT, said she was grateful that USAID had supported the program. "Without the assistance given to PACT, and the awareness that has been built up in our society, one 14 year-old Jamaican might have been sold into prostitution by so called male relatives. The would be traffickers are now incarcerated," said Nicholson.

'It's never too late'

Delrose Bahadure's ride through adolescence wasn't the smoothest. She grew up in the tough community of Russia in SavannalaMar, got pregnant at 15 and lost the baby. She rallied, however, to become the proud proprietor of Dellusions Designs, an events planning and promotions décor store which she set up on Rose Street in SavannalaMar.

Today at 30, she's an accomplished businesswoman, the type that the Rotary Club of Negril decided to choose as a guest speaker at its 'Lunch with a Leader' programme at Travellers Beach Resort last week. Nineteen teenagers who were among those that attended the luncheon benefited from the inspiration that Bahadure had to offer. "Whatever you want to do with your life; wherever you are now, no matter your age; you can still do it because you have time...time is gonna go by anyway so (if you don't) in ten years you will be ten years older but would not have moved," she said.

In a recollection of her childhood Bahadure said: "I grew up in a community where I was not socialised to aspire to anything but for the resilience of my parents who decided that come hell or high water I was going to get out."

And get out she did. After the miscarriage, she successfully completed Manning's Fifth Form earning 8 CXC and 4 GCE subjects. She then gained a Diploma in Hospitality and Tourism from the University of Technology, Kingston and a Bachelor of Science in Culinary Arts from the Florida International University.

With ten years' experience working in various management positions in the Hospitality Industry both in the USA and locally, last year she established Dellusions Designs. The Lunch with a Leader Programme began this year as the brainchild of the 50 year-old Rotary Club of Kingston, and was held for the first time by the Negril Club. Its President, Sabine Bolenius Brown, noted that 12 of the youngsters were from the Negril community and seven from the USA, "some from troubled backgrounds, some from normal background but all are seen as potential leaders."

The USA seven, from the Key learning Community of Indianapolis, Indiana, were accompanied by four teachers and were at the end of a weeklong visit to the island doing community cleanup and tree planting in Negril alongside the Theodore Project of Reverend Margaret Fowler. Praising Bahadure's speech, Renee Motz, one of their teachers said, "It is just what the young people need; they need role models and some of our students are also in desperate situations".